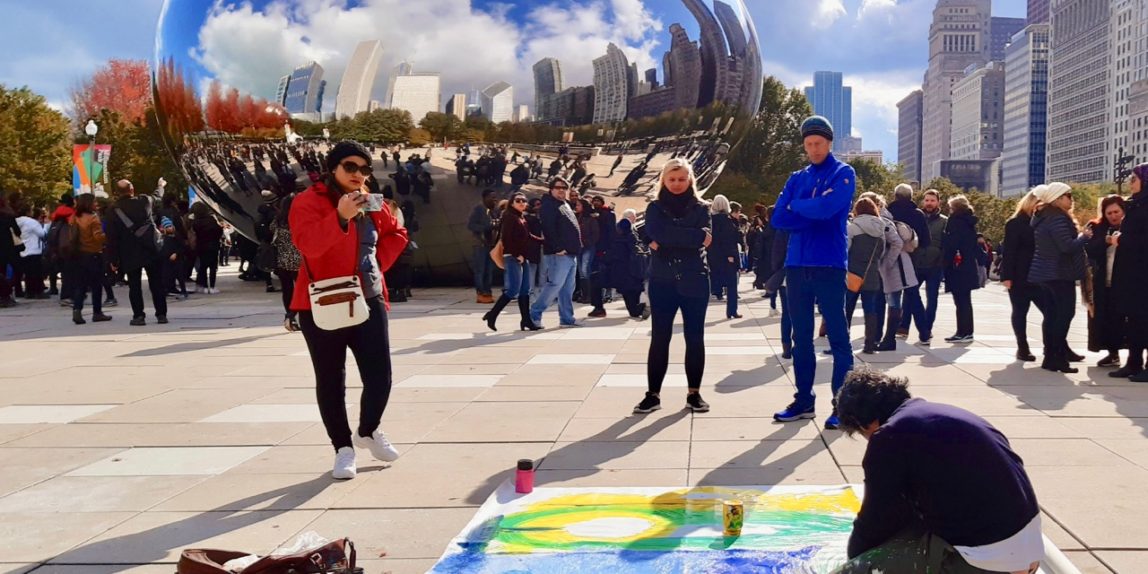 Architecture, art, a legendary city fire, a lake as big as a sea – and the infamous wind that sweeps through the gorges of houses: Chicago in Illinois State at Lake Michigan was the second station for 1001SOUL in the United States. Choosing a city so rich in history and culture for 1001SOUL can be taken for granted – but also requires some time to carefully explore the right spots for 1001SOUL. Yet after some research, we found our places to be: On a super chilly Friday afternoon, Reza painted on the shores of Lake Michigan in the immediate vicinity of the Adler Planetarium, opened in 1930 as the first planetarium in the western hemisphere. On Saturday, the Cloud Gate (also named as “The Bean” due to its shape) in Millennium Park was our place of choice. Numerous passers-by gathered around the action. To put it shortly: we had a blast!

We chose both locations, the Planetarium and ‘The Bean’ as stages for 1001SOUL because they reflect the philosophy of “1001SOUL” in an ideal way. The Planetarium connects earthly ground and human existence with the stars and the universe through the elements water and air. Research and philosophy have always relativized our human existence and placed it in new light and constellations. The study of what we believe, what we know and of what is still unknown to us is something that we also pursue in our project. What is time, who are we? What are the connections between heaven and earth? How do we perceive these connections, what impact does the universe have on what is happening on planet Earth?

The Cloud Gate sculpture in the heart of the City of Chicago, created by Indian artist Anish Kapoor and made of stainless steel, also takes up such questions of perspective in its artistic playfulness. People from different cultural, geographical and social backgrounds gather around the public sculpture that allows for countless reflections every day, and share a fascination for playing with reality and mirrors, location and distortion. What is reality? What is real here and now? These are questions that Reza also deals with in his pictures and Nic in her writings.

THANK YOU: For their support, help, advice and good conversations in Chicago, we would like to particularly thank the following people and friends: Mansour, Sanaz, Sasha, Simin, Sonia, and Joseph Hernandez from the Adler Planetarium as well as all the visitors to our events. You have become a part of 1001SOUL, how beautiful that is!

The images produced in Chicago will be partial images of a gigantic canvas at the end of the 1001SOUL project. All the images produced worldwide will be combined to form a large image showing the diversity of places and people in unity. Parallel to the painting, Nic shall record the encounters at the respective places and the conversations conducted with the people in the art of language in her book 1001Encounter/ 1001Begegnung.

While South Carolina formed the kick-off of 1001SOUL in North America, Chicago was also the kick-off of our campaign on GoFundMe, a crowdfunding platform that you can access here. We are grateful for donations, also in the form of accommodation, technical equipment, painting utensils or the support of volunteers.
Our worldwide journey continues with Los Angeles and Miami as our next stops in the U.S.
Follow us, here, on Instagram and GoFundMe.

Stay warmhearted, and be good to yourselves!